My son decided to take on getting the 2007 garden ready. He tilled the dirt, pulled out old roots, re-inforced the dividers, fertilized the soil and planted tomatoes, herbs and peppers. He plans to add a couple of more plants including zucchini. This post is just to document the development and progress of our garden. 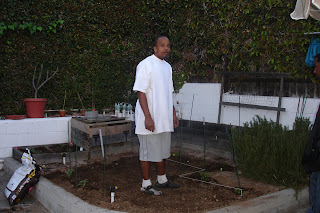 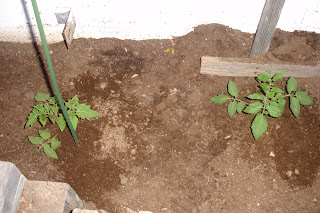 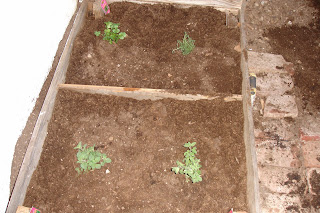 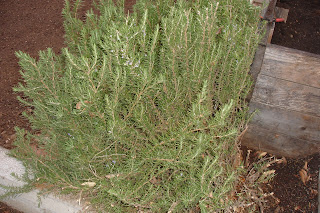 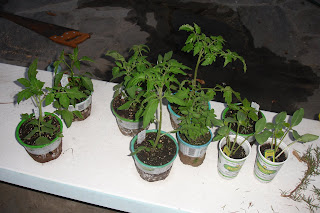 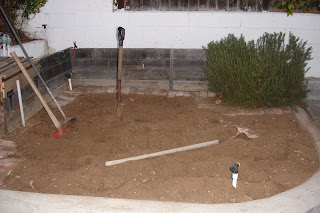 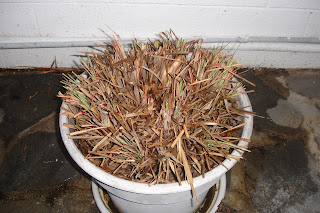 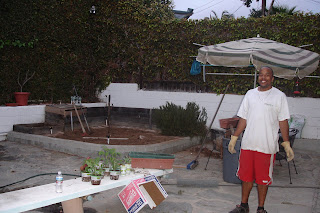 Backyard BBQ at the Rocke's

Four Q BBQ was at the Rocke for a little practice cook with 6 other teams. Overall we got Grand Reserve which is 2nd place overall based on points. See Survival Gourmet's (BigMista) post on BBQ Brethren forum for results.

BigMista has also posted pictures of the event. We all had a ball.

Though we did well overall thanks to great ribs and tri-tip, I was a bit disappointed with my chicken. I think I finished cooking it too soon and allowed it to rest too long and steam which diluted the sauce. Plus my skin looked pretty but was still a bit rubbery. Some of the judge's comments indicated it lacked taste and had too much smoke. Oh well. I did learn something. Despite the critic, it was still good.

I won't be cooking chicken at the Autry. My specialty is Pork Butt. Today, I did my own little practice run on Pork Butts. I'm only 3 hours into a cook, but all is going well with my thermometers and temps.

Getting Ready For A Backyard BBQ Preview For Autry 2007 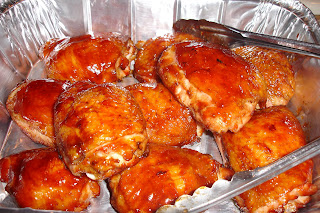 This past weekend, I pulled out the WSM to get a little practice before this weekend's backyard BBQ bash with fellow Southern California teams who will be competing at the "BBQn At the Autry" event April 14th, 2007.

This party is an abbreviated event in that there may not be adequate time to prepare pork butts and briskets using traditional slow cooking techniques. There are some BBQ'ers who say they can cook thse meats in 5-7 hours and they will be showing their techniques (hopefully). Proof is in the product.

The primary meats for this event are chicken, ribs and tritip. Three of our Four Q BBQ will be competing. I will prepare the chicken, Neil is doing the ribs and the Professor is doing the tritip. 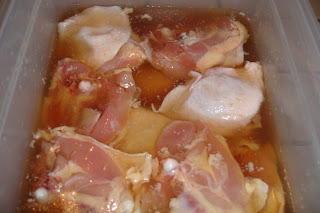 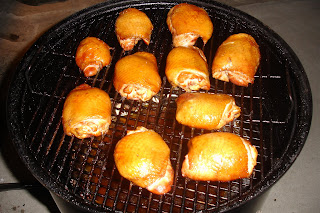 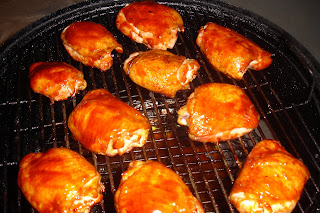 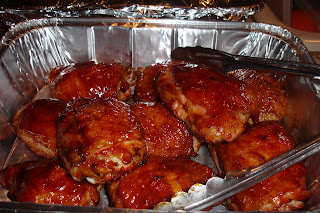 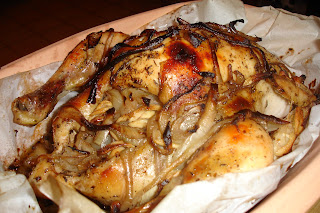 T (my son) and I decided to prepare a nice family style dinner. I bought a clay roasting pot from Ikea about 2 months ago and had never used it. In addition, I had a buy one (actually 2) and get one (actualy 2)coupon from Costco for whole chickens. Armed with the clay pot and 4 chickens, we went with the idea to roast a whole chicken.

T just returned from a long vacation on the island of Seychelle. He stayed with a family where he had the opportunity to learn to cook many of their recipes. He didn't write anything down but went only by memory. Using a blending of onions, garlic, lemon, various herbs, salt and pepper, we have Clay Pot Roasted Chicken. 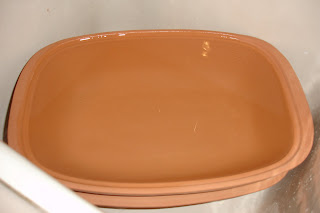 Manufacturer recommeds soaking clay pot in water for at least 40minutes before first use. 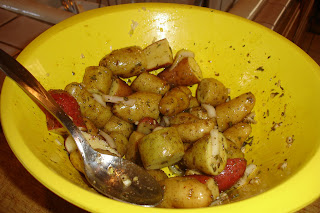 T seasoned some fingerling potatoes with salt, pepper, parsley, lemon juice, a pinch of oregano and olive oil to cook with the chicken. 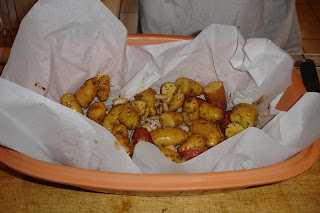 The clay pot was lined with parchment paper mainly to make cleanup easier and to assure that if there were leaks in the pot they would be minimalized. 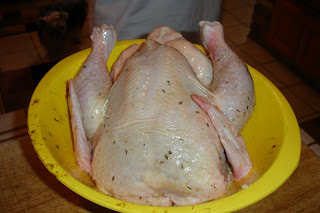 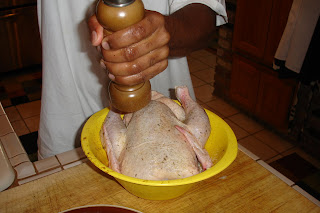 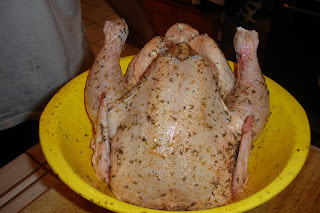 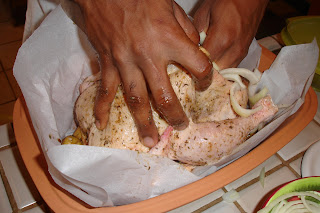 Lots of onions and garlic to stuff the chicken 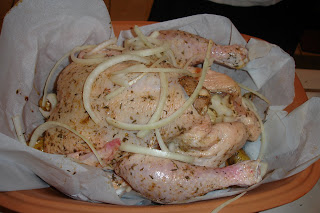 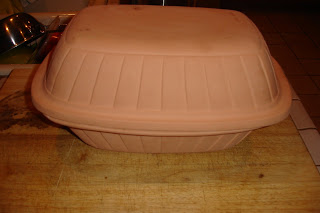 Clay pot removed from oven and ready for a Voila!


The chicken nicely browned in the covered clay pot. It was moist with a good consistency and very tasty. The aroma when the top of the pot was removed was fantastic. We actually didn't serve for about an hour after cooking was complete and the chicken held up without drying out and kept at a serving temperature.

So you all ask what influence Seychelle had on this chicken? I thought it was similar to anything we would do here. He added that in Seychelle, they would have cooked it with whole tomatoes, left out the potatoes and that's about it.
Posted by sylvie1950 at 8:06 AM 2 comments:

BBQ Competition Season Getting a Headstart 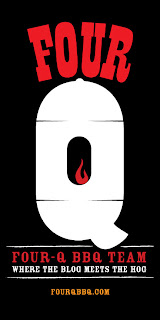 It has been a while since Four Q BBQ Team's last competition in October 2006 at Imperial Beach. We are now getting our gear ready to compete at this year's BBQ'n at the Autry 2007 event April 14th.

A pre-event backyard BBQ is planned a couple of weeks before the Autry competition where some of us local teams will get together to meet, greet and taste each other's foods. This will be a real treat in that during most competitions, we rarely get to taste what the other teams have prepared. In addition, we rarely get to see what the other team turn-in boxes look like.

Stay tuned for more posts on BBQ competition.
Posted by sylvie1950 at 8:03 AM 5 comments: 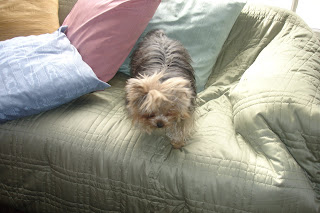 Ziggy hates his anti-flea treatments. As soon as he sees me getting the package out, he tries to run away and hide. Once I apply the contents of the the little packet, he heads straight for whatever couch or rug he feels he can go to in an attempt to remove the exogenous invader of his skin. I can imagine, it probably has a little sting but that has be a better solution than a flea infestation or routine baths which he also hates. Here's Ziggy. 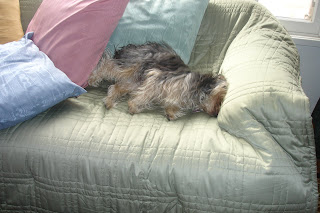 Thank you Sweetnicks for hosting another Weekend Dog Blogging.

I apologize for the late post but Blogger put a post publish hold on my site because they thought I could be a spammer. To add insult to injury, they won't release my site for 2 days pending someone from Blogger actually looking at the site to see that it is ok. Go figure. Got to be a better way.

This is a cut and paste of their message.

Your blog is locked
Blogger's spam-prevention robots have detected that your blog has characteristics of a spam blog. (What's a spam blog?) Since you're an actual person reading this, your blog is probably not a spam blog. Automated spam detection is inherently fuzzy, and we sincerely apologize for this false positive.

We received your unlock request on March 4, 2007. On behalf of the robots, we apologize for locking your non-spam blog. Please be patient while we take a look at your blog and verify that it is not spam.

Find out more about how Blogger is fighting spam blogs.

Well today, 3/5/07, I received the following email from Blogger:

Your blog has been reviewed, verified, and cleared for regular use so that
it will no longer appear as potential spam. If you sign out of Blogger and
sign back in again, you should be able to post as normal. Thanks for your
patience, and we apologize for any inconvenience this has caused.