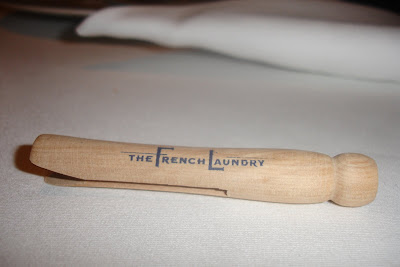 On March 17th, 2008 at 10:00am, I set up two cell phones and a land line to start dialing the French Laundry reservation desk. Yes, reservations can only be made as early as 60 days to the date you wish to dine and this line is very hard to get through on. Luckily I was giving blood that morning which allowed me time while pumping blood and recovering to dial and redial and redial until 2 hours later I got through to be placed on hold listening to a pre-recorded message giving the rules for making a French Laundry reservation. I was on hold for about 10 minutes when finally I got through to a human. I needed a table for three(my husband,son and me). This presented a slight problem because there are limited four person tables which meant we would only have three dining thus wasting one seat. I was allowed to make the reservation but cautioned that it would be ok to add one person, but if I need to decrease to two, I would lose the reservation. You must hold the reservation using a credit card. If you do not cancel prior to a specifed date, your card would be charged $100 per person.

The only time available was an 1115 am lunch but I could request to be wait listed for a dinner reservation (which I didn't get but that's ok- I got a reservation).

Not sure what was going on in Napa, Yountville or St. Helene that weekend, but reasonable hotel reservations presented another problem. I finally found accomodations which was challenging considering that I started looking more than 7 weeks before the dinner reservation.

I present all the above just to re-enforce how important to me it was to dine at the French Laundry. I hope it is ok to quote the 2008 Zagat Guide on the America's top restaurants.

"Thomas Kellers magnum opus" in Yountville may be "famous for being famous but consider yourself royalty if you land a table" at this "haute" French-New American "gastronomic experience" that's "expensive" enough "for three lifetimes" and "fantastic" enough to "halt all conversation"; foodies with four hours on their hand....."prepare for orbit" as each course on the menu arrives...

There is a strict dress code which includes a jacket requirement for gentlemen. Because temps in the area were 90 degrees plus, this was waived this particular weekend. My guys brought one anyway.

The menu at the French Laundry changes daily and the lunch menu is different from that day's dinner menu. The lunch menu has a focus on the classics and per our table captain, many of the dishes may be found in the French Laundry cookbook along with some new very creative items. There are only two choices in the prixe fixe menu- chef's choice and vegetarian. There are upgrades available at an additional supplement to the prixe fixe price. Of course the upgrades add another level of genious to the regular choices.

There are some perks which can be requested/added such as Thomas Keller's famous doughnuts cappuchino semifreddo with cinnamon sugar. After verification from the kitchen, our table captain informed us we would be able to get these doughnuts. From my photos, you may note, this is the only item I missed getting a photo of.

I was also told by some fellow bloggers that you can also request a tour of the kitchen at the completion of the meal. Because my son's roomate is doing an externship at the French Laundry, we were offered the tour without asking. (Table captain knew this because my son told her during our initial pre dinner getting acquainted period).

Ok, so we are now at the French Laundry. We were seated in the upstairs dining area. The only choice we made for dining which I wouldn't do again was to order so many wine pairings. It was very hard to drink so much wine and it ain't cheap. 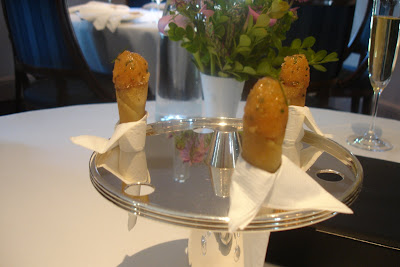 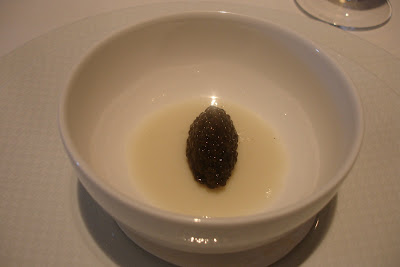 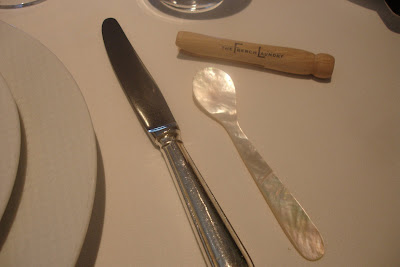 
We then had a choice of either a Salad of Asparagus and Brooks Cherries or Moulard Duck Foie Gras Torchon (with a upgrade supplement). We all chose the foie gras. It was suggested that the foie gras be spread on the very tasty toast provided. What was extraordinary was that midway through eating the foie gras we were served a fresh warmed replacement of the butter brioche bread to assure the foie gras was eaten with warmed bread. G burst a smile at this action. what service and attention to detail. 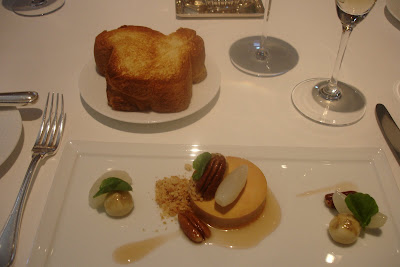 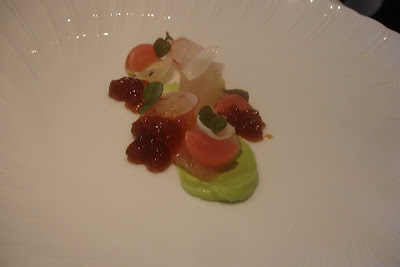 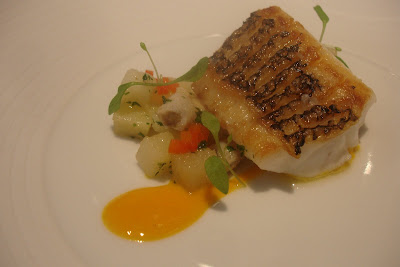 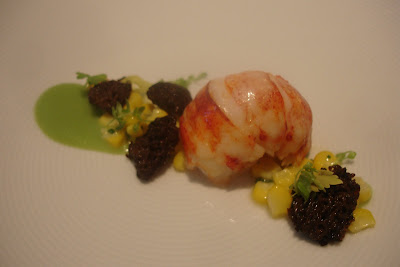 All along we are served bread choices with two types of butter.
one an unsalted butter from a local dairy. The other a whipped butter source I don't remember the source. 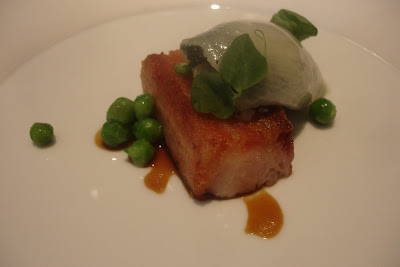 Another choice with an upgrade supplement.
Elysian Fields Farm Lamb Ribeye (my choice)or Grilled Pave of Kuroge Beef From Shiga(similar to Kobe beef) choice of G and Tony. The ribeye was exceptional but the Kuroge beef was to die for. The guys gave me a taste. Oh my God how tender, flavorful and almost orgasmic. 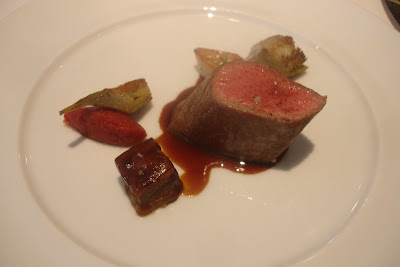 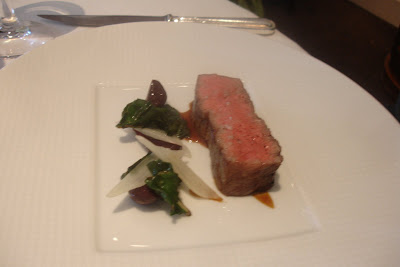 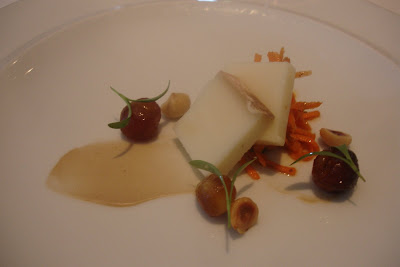 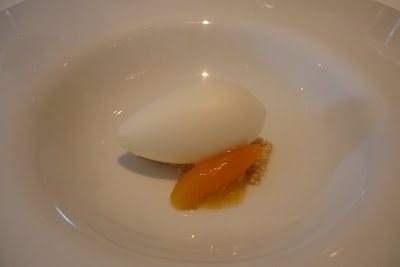 Doughtnuts (no photo- not sure why I forgot to document such an exceptional doughnut. See the cookbook as it was served exactly like that.)

Choice of dessert, we all selected the Lingot de Chocolat En mousse de Malt Croustillante with a popcorn glace. We were told that the popcorn glace was made by taking buttered popcorn infused in milk, filtered, sweetened and then frozen. Sounds odd, but it was exceptional with the chocolate mousse. 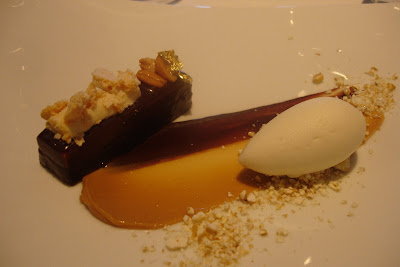 ...and then all sorts of sweet treats called Mignardises started showing up 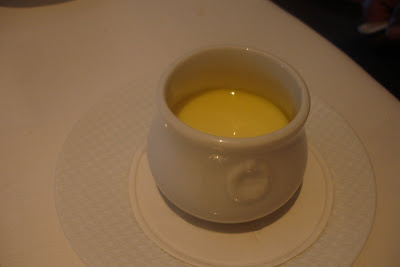 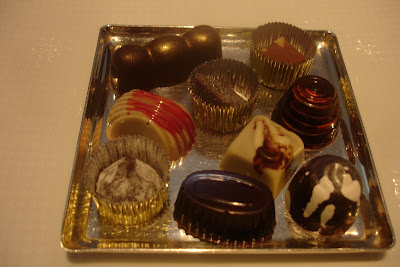 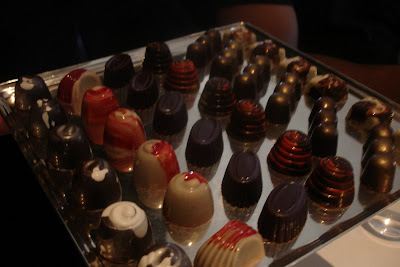 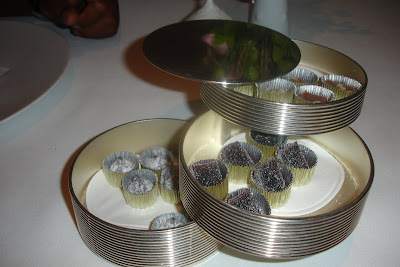 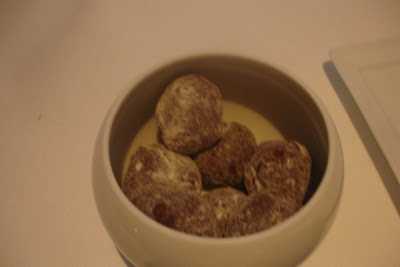 After 4 hours of dining, we were given a packet of shortbread cookies to take home. Feeling very gluttonous we took our kitchen tour, headed back to the hotel and crashed. 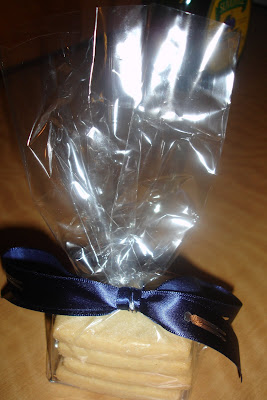 See my Flickr Photos for additional photos
Posted by sylvie1950 at 9:12 PM 8 comments: 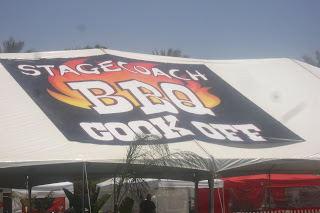 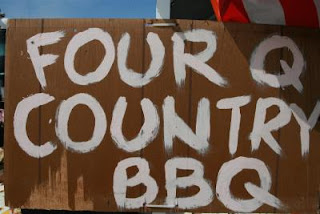 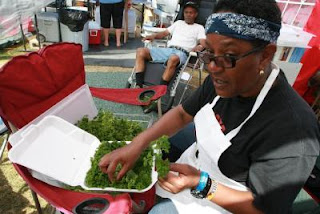 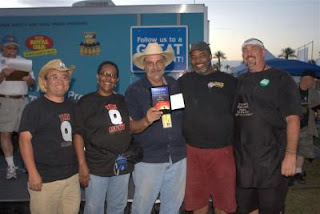