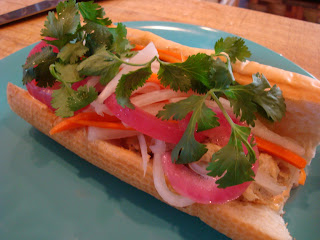 We invited some friends over for a lazy Sunday Brunch.  I have been wanting to make Banh Mi for quite a while and decided this would be my treat today.  After looking throughout the internet for recipes and prepping guidelines, I discovered that really it is quite easy.  The most important ingredient is the fresh baked baguette.

I'm quite an intuitive cook and just went with the flow in making these.  All the recipes and reviews describe that the combination of flavors and textures are what separates this Viet Namese street food from your usual hoagie or subway.  A combination of hot, sweet, sour and salty with fresh flavors and crunchy textures make for an outstanding sandwich.

I started prep with a julienne of carrots and daikon radish.  I dissolved sugar in the rice vinegar, added to the carrots and radish and let it set in refrigerator for a few hours.

I made a spicy mayo by adding 1/2 the juice of a large lime and 3 tsp of sriracha to about a 1/3 cup of mayo.  You can always make it hotter by adding more of sriracha.

I already had some pickled red onion in the refrigerator (vinegar and salt added to sliced red onion).

I chose not to toast the baguette but instead to leave it soft on the inside.

A slathering of the spicy mayo was layered on the baguette, then the fish cake, other veggies and finally the cilantro leaves.

I served this with a side of spicy slaw with broccoli.  (recipe by Minnie Luong from a Surfas demonstration) 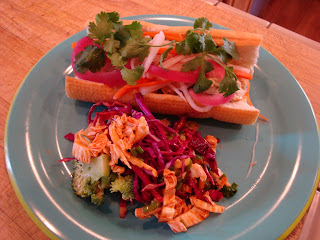