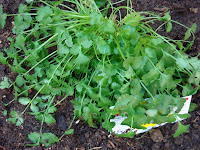 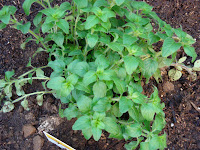 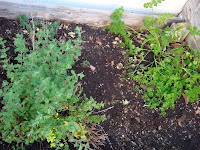 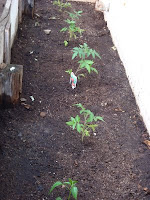 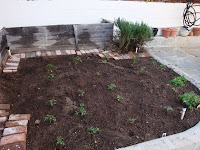 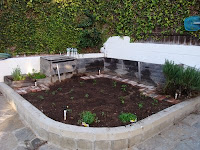 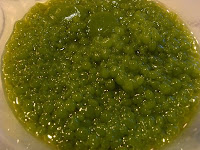 I decided to see if I could recreate and even just experiment with making some flavorful spheres using molecular gastronomy. I used one of the recipes by Andi Phillips for Green Onion, Ginger, Sake Caviar as a base to make my rendition of Green Onion, Ginger, Jalapeno Caviar.

My substitutions were water instead of sake because all I had was some very good sake and I didn't want to waste it in case this didn't come out like I hoped. I also added a whole sliced jalapeno and some fresh cilantro leaves to the veggies. The salt was also adjusted at the end for a total of 1 tsp.

I successfully created some spheres with a bit of heat and some flavor. I made some caviar size and others an olive size. The sake probably would have added a another layer of taste missing in my adaptation. I didn't have a fancy way to serve them so my hubby and I just added the 'caviar' to our salads. It made for great conversation and didn't take anything away from the salad.

I will be making more spheres in the future. It was fun.

In a medium bowl, dissolve the calcium chloride in the 5 cups of water. Set aside for later use.

In a 2 qt saucepan combine ginger, onions, & sake. Bring to a rolling boil. Simmer on low for 10 minutes. Remove from heat. Run mixture through the food processor until the vegetables are liquefied. This may need to be done in 2 batches if using a home style food processor. Strain solid matter out of liquid and discard. Measure 3 ¼ cups of the liquid and return it to the 2 quart saucepan. Bring it back up to a simmer. Dump in the sodium alginate all at once. Turn heat to low and whisk vigorously over low heat for one minute. Run the mixture through a sieve. Stir in salt. Transfer mixture to a squeeze bottle. Drop about 200 pearl sized drops into the calcium chloride bath at a time. Allow the pearls to sit in the bath for 1 minute. In order to strain pearls while retaining bath solution for further use, have another medium bowl at hand. Pour bath & pearls into a strainer positioned over the 2nd bowl. Rinse the pearls under cold running water. Transfer pearls to a sieve positioned over a 3rd bowl to drain for later use. Repeat jelling process until all of the alginate mixture is used. Discard bath water when jelling process is complete. 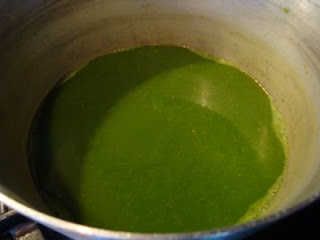 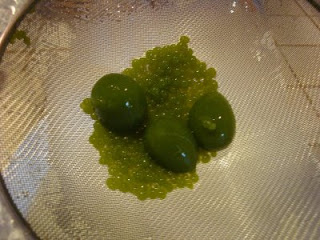 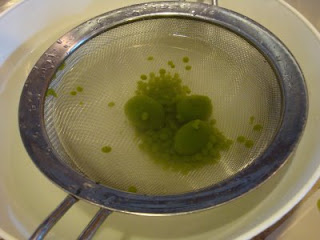 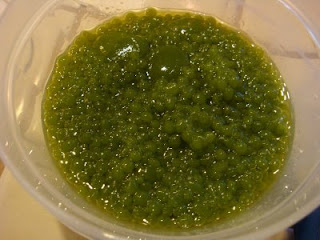 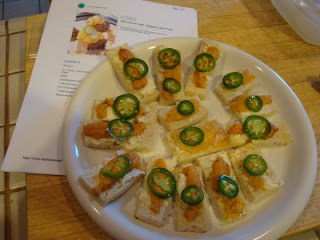 While shopping in a local Japanese Market, Marukai located in Gardena I came across a package of Uni(Sea Urchin roe/gonads) in their fresh seafood section. Visits to my favorite Sushi bar often results in me ordering something Uni and at a pretty good price. These at Marukai were $6.98 for a 2 ounce tray and I couldn't pass that up. Now, what could I do with it? I found the below recipe on the Martha Stewart web site and today, this was my lunch treat. I didn't have Yuzu, so the next best thing was some fresh lemon juice* as a substitute. I used sour dough bread. Yea, this meal packed lots of calories and fat, but who is counting (today)?

8 (1 1/2-by-1-inch) pieces black, rye, or sourdough bread
Butter
2 tablespoons cornstarch
1 cup yuzu juice
8 to 16 pieces sea urchin
1 small jalapeno, thinly sliced crosswise
Maldon sea salt
Directions
1.Lightly toast bread pieces until crispy on the outside but still chewy inside; butter one side of each piece of toast and set aside.
2.In a small bowl, whisk together cornstarch with 2 tablespoons water. Place 1/2 cup yuzu juice in a small saucepan and whisk in cornstarch mixture. Bring mixture to a simmer over medium heat. Remove from heat and whisk in remaining 1/2 cup yuzu juice. Pour yuzu mixture immediately into a bowl set in an ice water-bath. Let cool completely.
3.Top each piece of buttered toast with 1 or 2 pieces of sea urchin and a piece of jalapeno. Spoon over cooled yuzu mixture; serve immediately.
First published February 2008

This recipe for sea urchin with jalapeno and yuzu is courtesy of chef Gregory Brainin as published on the Martha Stewart web site. 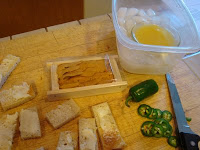 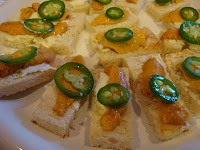 If you ever wanted to learn more about BBQ and the skills involved in being a KCBS BBQ Judge, here's your chance! This class will be held on March 21, 2009 at Throwback's Sports Bar in Anaheim, CA.

At this class, you will receive instruction in KCBS* scoring, procedures, allowed and disallowed display techniques, 2009 new rules, and actually score competition entries in all four KCBS categories. After scoring each meat, scores will be discussed and you’ll receive feed back that will help you to more systematically score entries. If you are a new competitor, you’ll get some real insights into what constitutes a winning entry in the judges’ eyes.

Even though I have been competing since April 2006, I still feel this class will help me in future competitions. I plan to take this class and encourage anyone else with an interest in judging or competing to attend. The cost is $75 for non KCBS members (includeds membership) and $40 for KCBS members.


In addition, stay tuned for the 2nd Annual "Quen For Kids" BBQ cookoff sponsored by Kristie's Foundation coming May 9th. Completion of the March 21st judging class will make you eligible to apply to be a judge at the May 9th competition event (see flyer below). More information on this event can be found at Quen for Kids.

I recently went to a Molecular Gastronomy demonstration at my favorite restaurant supply store, Surfas. The recipes presented can be viewed on this link to Surfas. Sperification was the process that most intrigued me. Simply adding sodium alginate to a liquid such as pureed mango along with other liquid to arrive at the consistency and taste you want, filter out solids and then dripping into a bowl of calcium chloride results in the sodium alginate and calcium reaction to form a film around the liquid and thus a sphere. The sphere is filled with still liquid flavor you prepared. The reverse process is used for foods rich in calcium where you actually drizzle these in a sodium alginate bath. I am oversimplifying the process.

Spheres can be made in varying sizes (caviar looking to olive size or larger).

My interest in this was stimulated by a recent FoodTV demonstration by El Bulli chef, Ferran Adrian. The Youtube video is attached. The process used in this video is what was described as a reverse process by the chef providing the demonstration at Surfas. The process involves using very good olives, puree and filter them, the step missing from the video is what Ferran adds to the already calcium rich olives before forming the spheres. This is described in his book, A Day At El Bulli. It does include adding calcium to the olive puree with a thickener and then dipping the olive mixture in an alginate bath.

An Olive Made From an Olive

Other recipes using moleculary gastonomy can be viewed at this Surfas link. Select those added 3/2/09 for specific recipes addressed at the 2-28-09 Surfas demonstration.
Posted by sylvie1950 at 4:54 PM 3 comments: