Bravo finally posted the Slow Braised Honey and Cider Caramelized Pork Belly recipe.  There are some differences from what was described on the season 1, episode 7 aired Chef Academy  (for example- what happened to the cumin and bay leaves, when did the beef  stock cube enter, only one star anise and now fennel seeds?   I was wrong about the apple cider vinegar as it should have been just cider.)  Now I have an excuse to do this improved recipe .

•3.5 lb Organic pork belly, with rind removed but the fat on

1. In a frying pan, dry-fry the onions until caramelized.
2. Heat an ovenproof cast-iron pan. Season the pork belly and dry-fry on both sides, fat side first, until golden brown, ensuring that all sides of the meat are sealed. Remove from the pan and set aside to rest for 3-5 minutes. (Most of the fat should have been released during this stage.)
3. Preheat the oven to 350°c.
4. Lay the onions on the pork fat residue in the ovenproof pan and cover with the pork belly.
5. In a bowl, combine all the ingredients for the braising liquor. Pour over the pork belly and cook in the preheated oven for 2 hours.
6. Occasionally remove from the oven and baste the pork with the reducing sauce, this will help to build up a lustrous glaze when finished.
7. Remove from the oven, lift the meat out of the pan to rest for 10 minutes and set aside. Remove the onions with a slotted spoon.
8. Carefully reduce the remaining liquor to the consistency of a sauce.
9. Serve with olive oil mashed potato

Notes
Instead of onions you can use large shallots or fennel
Posted by sylvie1950 at 9:39 PM 1 comment: 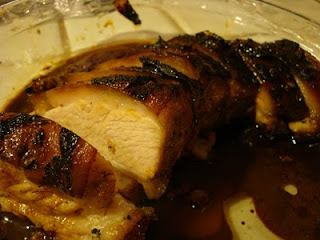 After watching Season 1, episode 7 of Bravo's Chef Academy, I have been obsessed with the Honey Cider Vinegar Carmelized Pork Belly Chef Novelli demonstrated. Of all the meat dishes he presented in this epsiode, it was not used in the challenge nor was the recipe posted on the Bravo site. 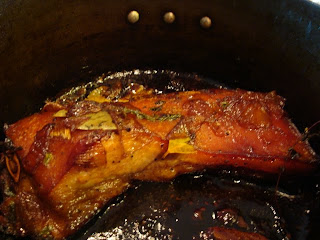 With my mouth drooling over the presented entree, I searched all over for that same recipe. Couldn't find it on the internet, so I just used my intuitive skills, a long with the ingredients he used and I came up with what I think is a similar rendition of the recipe. 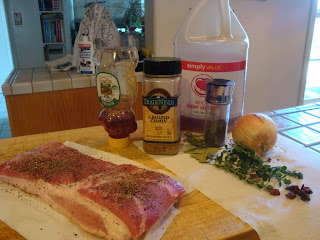 Oven was pre heated to 325 degrees. I believe the instructions given on the show stated the pork belly would be cooked in the oven for 1-2 hours. I actually cooked it for 90 minutes with dutch oven top on and then removed the top and cooked for an additional 10 minutes to get my oven back up to temp. I then turned off the oven and let the pork belly finish the carmelizing process. Don't open the oven during this last 30 minutes.

In addition to these ingredients, it appeared that the pork belly on the show had the meat side seasoned with salt and pepper.

I seasoned the belly with the salt, pepper and cumin. I didn't measure the amounts but relied on what looked like enough.

I then browned each side in a cast iron like dutch oven. 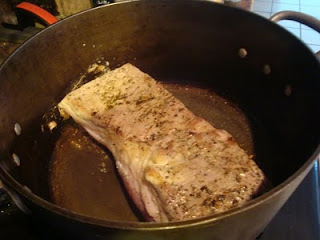 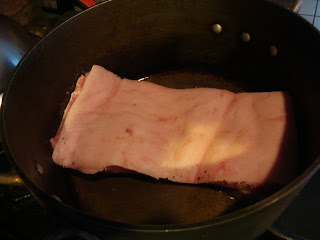 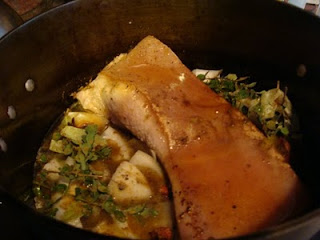 The dutch oven was placed in the oven and cooked as described above.  I did attempt to crisp the skin some using a blow torch. I abandoned that idea as it didn't add to the presentation.

I really loved the flavor of the carmelized applecider vinegar and honey. The texture of the pork belly was heavenly. I love that gooey fat and the seasonings flavored the meat just right for me. Served on a white corn tortilla, I was in heaven. 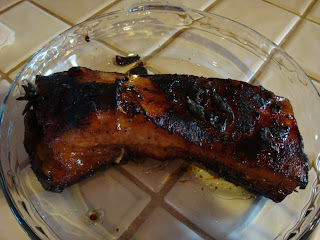 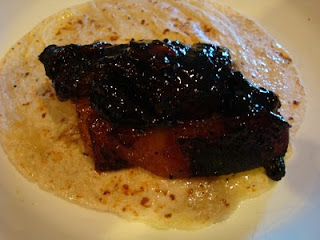 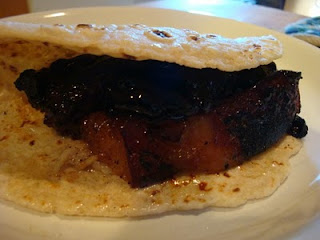 The recipe was prepared on the final Episodes 8 and 9.  There was a problem noted by the chefs which led two of the chefs to get into a heated argument.  Apparently after one hour the pork belly did not have the correct color.  Zoe suggested that all it needed was more time in the oven.  The others disagreed with her.  Later in the show they disclosed that they cooked the pork belly for 5 hours and it was Chef Novelli noted it was possibly over done.  What I noticed is that in episode 7 the pork belly was cooked covered in the enamel on cast iron dut oven.  However, in episode 8-9, it was started uncovered in the oven.

In this last episode, Chef Novelli stated that it should cook for 4 hours but I thought he said in epsiode 7 that it should cook 1-2 hours.  I did get very good carmelization with my process.  I suggest flexibility when cooking this and allow between 2  and 3 hours. 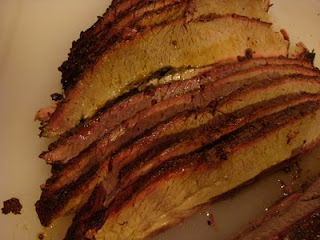 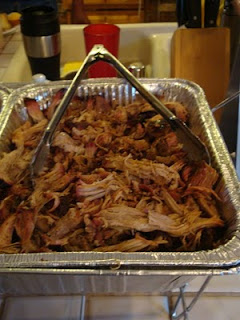 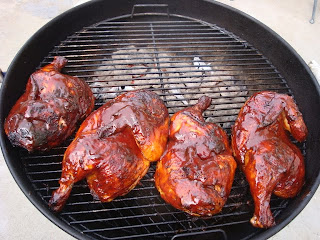 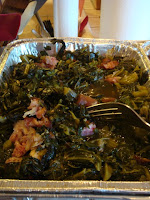 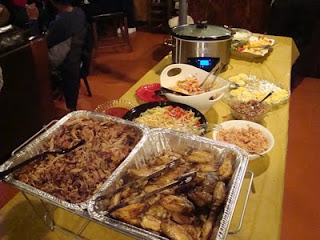 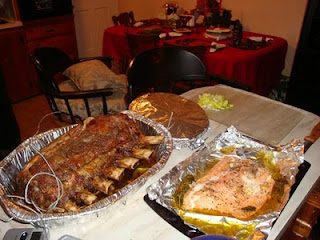 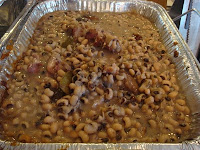 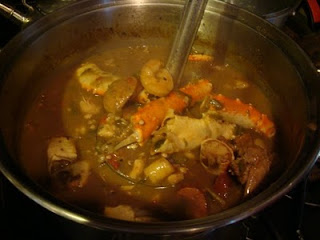 
See my Flickr site for a few photos taken around the holidays. These include foods from Chrtistmas Eve, Christmas Day and New Years day. There was a lot of eating going on for my family and friends.

I missed a few photo opportunities which included a smoked turkey for Christmas.
Posted by sylvie1950 at 1:03 PM 2 comments: 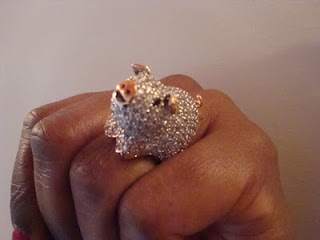 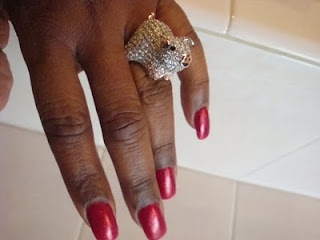 Christmas present from my hubby. He knows my love for BBQ related stuff, being I am the pulled pork queen. Cubic Zirconium but oh sooo cute.
Posted by sylvie1950 at 1:35 PM 4 comments: