Memorial Day weekend marks the official beginning of summertime backyard cooking. With one goal in mind for this weekend and you know that was to make sure I spent a good deal of time in the kitchen and doing backyard cooking. It's at these times that I wish I had a full outdoor kithen.

No particular menu in mind, just use what's in the freezer, refrigerator and pantry. I did pickup some things at Costco on my home from work Friday (wild shrimp U-12, some tomatoes and mozzarella cheese). I removed from the freezer a tri tip I had previously marinated (Professor's secret marinade) and then frozen for later use. For Easter, my son had boiled too much penne pasta so I froze some. This I removed from the freezer to make a pasta salad.

I find that cooking eases my mind and takes me away from all those stresses of work. No one can tell me what to do in my kitchen. I work at my pace and produce foods for the enjoyment of others. This past week at work was one of those that was hard to take. My desk was piled up with items which accumulated while I was vacation (no one to cover my workload) and to add to this, it seems everyone wanted to re-invent my priority list and bump their needs over mind. I'm thankful for a class I took a couple of years ago on how to say "no". Anyway, I'm digressing.

My daughter T is home for a week prior to moving to the location of her very first 100% off my payroll job. Friday, G and I took her to our favorite local sushi restaurant, Sushi Karen .

Saturday, T and I headed for some shopping at Ontario Mills. Girls day out and we found some great Memorial Weekend sales even for me. I guess you are wondering where the weekend of cooking begins. Well, after the shopping spree,we headed home where I began Saturday's dinner and prepared the ribs for the next days smoke.

I marinated the wild large shrimp (fyi- Costco had both farm raised and wild shrimp for the same price. I went for the wild shrimp after remembering a pod cast which supported wild U.S. shrimp versus farm raised and convincing me that wild shrimp would be more tasty and have a better texture). My marinade consisted of olive oil, parsley, salt, pepper and lots of minced garlic. I was going to grill these so I decided to skewer them. 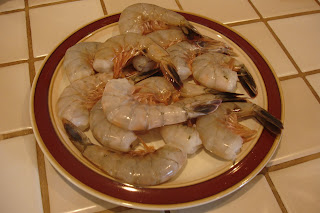 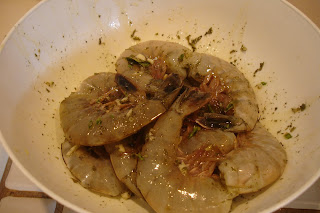 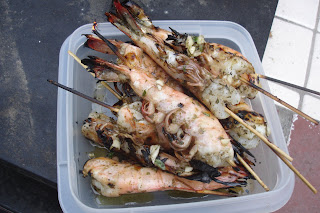 
My pasta salad was adapted from a recipe I found in last AAA's Westways magazine. Caprese Salad with kalamata olives, tomatoes, mozzarella cheese, zucchini and basil (from my garden), roasted bell peppers, balsamic vinegar, olive oil, penne pasta, garlic, salt and pepper. This salad was fantastic. Best served at room temperature. My substitutions were the balsamic vinegar instead of red wine vinegar, roasted bell peppers instead of sun dried tomatoes in olive oil and I added the zucchini. 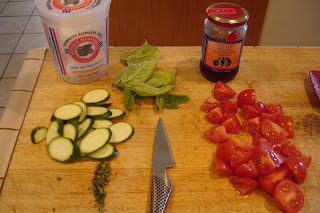 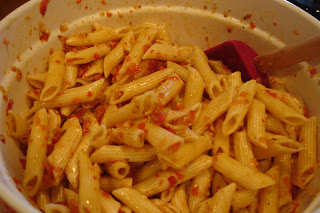 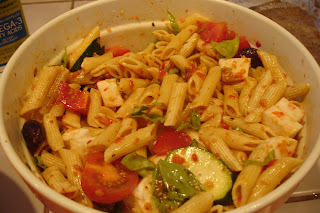 The marinaded tri tip was grilled over indirect fire until med rare. this is sliced and served with some of the marinade I had in the refrigerator. Can't divuldge the recipe for the marinade as I promised I would never publish it as a condition the Professor would give me the recipe. Let's just say, it is jam packed with Asian spices, sauces and herbs. 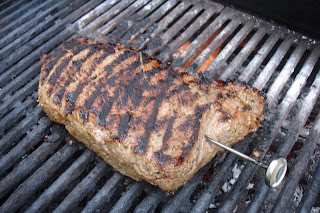 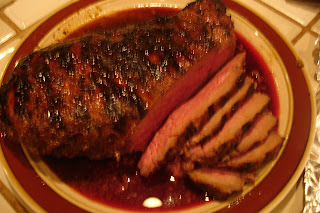 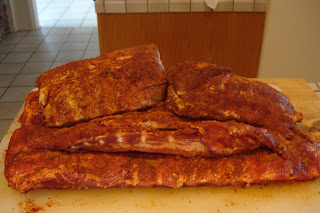 I found time to prepare some spare ribs. I cleaned them, removing excess fat and the membrane covering the ribs. I rubbed them with my Sylvie's Magic rub and then returned them to the refrigerator to smoke the next day. 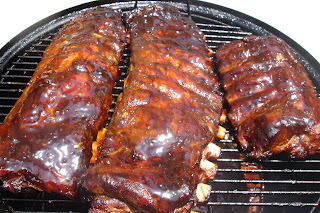 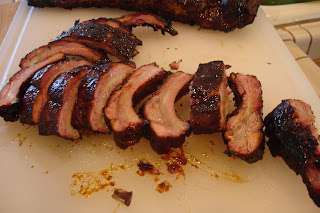 In that T is a pseudo vegetarian (she eats fish but no other meats), I also prepped some salmon filets to smoke for her. 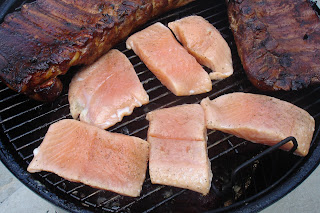 For dessert, T requested that I make Cinnamon Bread Pudding. I used the same recipe posted previously minus the Nutella chocolate. I substituted the raisins with dried blueberries and added walnuts per T's request. 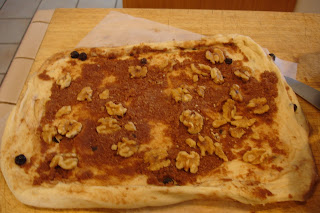 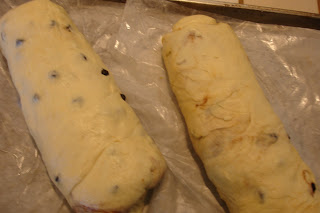 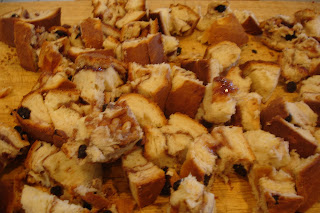 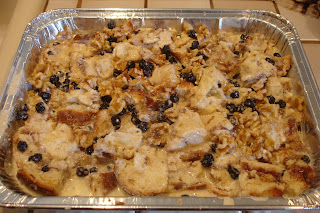 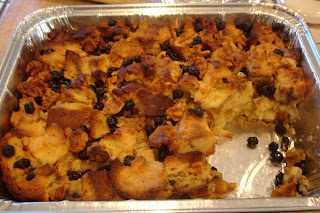 With all this food, by Monday (official Memorial Day), we are having leftovers.
Posted by sylvie1950 at 4:32 PM 6 comments:

My garden has really taken off. Upon return home, to my delight I found a huge zucchini growing along with quite a few regular sized ones. Many tomatoes are present along with, cayenne peppers and a couple of bell peppers. 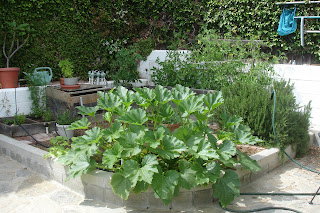 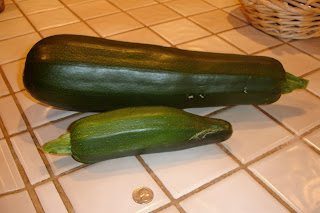 I plan to make a stuffed zucchini today with this huge treat. 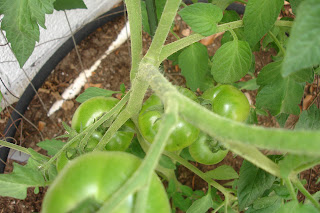 While we were on vacation, Ziggy spent some quality time with my mother. I picked him up today and was greeted with a very excited and happy to see me Yorkie. 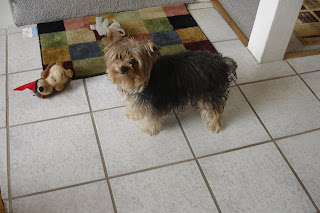 Upon return home, Ziggy found his stuffed animals and gathered them to play.

Ziggy is glad to be back home and says hello to you all.
Posted by sylvie1950 at 4:33 PM No comments:

Back on the West Coast

Hello all. I'm now back in Los Angeles after a wonderful vacation and time spent at my daughter's graduation from the University of Pennsylvania plus a visit to my son in Hyde Park at the Culinary Institute of America (CIA).

Penn bestowed honorary doctorate degrees to many deserving people including Aretha Franklin, Queen of Soul, Shirley Franklin (mayor of Atlanta, GA) and U.S. Supreme Court Justice Ruth Bader Ginsberg along with James A. Baker III, the former secretary of state. No, Aretha did not sing, but it was a honor to watch her receive the degree. 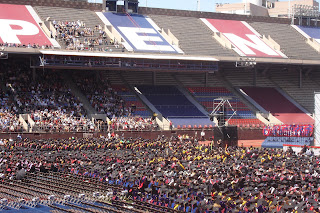 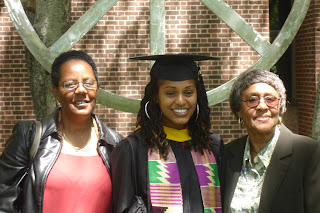 T with proud Mom and Grandma 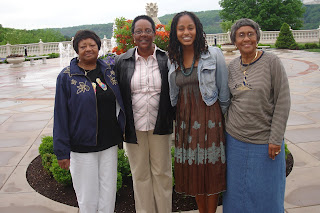 View From front of Roth Hall at CIA

It was a food filled vacation though I did not get many pictures to document the great meals we had including dinner two evenings at the CIA's American Bounty and Ristorante Caterina de Medici. If any of you plan to be in the Hyde Park/Poughkeepsie, NY area, it is well worth it to dine at one of the CIA restaurants. Pricey but exceptional cuisine.
Posted by sylvie1950 at 3:54 PM 2 comments:

This entry will include just my ramblings to document a very uneventful food week.

As a matter of fact, this past week just flew by me. Strange how the older you get, the faster time flys. I've been busy planning a little vacation which includes attending my daughter's graduation this coming weekend from the University of Pennsylvania's Wharton School of Business [Bachelors of Science in Economics]. (Did I mention that I'm soooo proud of her- congrats TNC.) She does have a job lined up and that possibly means G and I can get her off our payroll.

Saturday, I attended a baby shower for one of my cousins. It is always nice to get together with family. I heard they were going to serve a BBQ meal at the shower, so I was excited to try it. Well, it was oven baked (possibly even par boiled) with a generic unadulterated sauce and I will not say anything more other than I have been spoiled by eating Que cooked the right way.

I missed Weekend Dog Blogging- sorry Ziggy. At a lost for time, I have also been neglecting my kitchen and smoker. I haven't cooked anything exciting in a while but I'll have to make up for it possibly Memorial Day weekend.

Over the next week, I'll have limited access to the internet. When I can I will definitely update this blog.
Posted by sylvie1950 at 7:53 AM 6 comments: