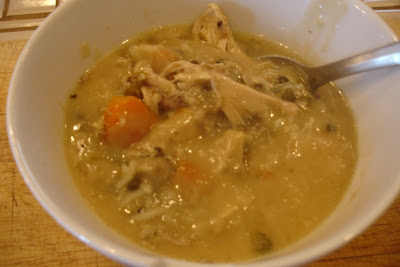 Been raining all week. With a lot of free time this weekend because of the postponed backyard event, I decided to do a little cooking. G and I also took a couple of hours to go to the movies. We finally saw Sweeny Todd, and no, I'm not cooking any meat pies.

Yesterday, I cooked some chicken soup (sorry no pictures) mostly because chicken soup exudes warmth plus G was starting to develop a winter cold. Nothing like chicken soup to make you feel better. I didn't use a recipe but instead just added a little of this and a little of that based on what was in my refrigerator. Ingredients did include cut carrots, celery, green bell pepper, shallots, red onion, capers, garlic, fresh cilantro leaves, dried red chile, dried herbs including thyme, basil, parsley and oregano. One whole chicken with skin on was first brought to boil in water with a little salt. I removed the scum as it cooked. Once most scum removed, I added the veggies and herbs plus a little more salt and fresh ground black pepper. I reduced the heat to a simmer and a couple of hours later,it was ready. Rice on the side.

With the leftover soup from Saturday, I strained off the broth and used it to make a thick gravy (gravy made with olive oil, flour and chicken broth). Cooking of the gravy reduces the chicken broth and I didn't have to adjust the seasonings at all. I then returned the gravy back to the soup solids and added some of the rice. Yum, was that good. Sort of reminded me of the chicken and rice with gravy they served when I was in high school years ago. L.A. Unified recipe during the times when cafeteria meals were actually quite good. We use to look forward to the days when this was on the menu.

I also decided to do a little baking. I usually purchase bananas from Costco. For $1.30 you get quite a few bananas which I can never seem to finsh over the course of a week. Since they are so inexpensive, it doesn't hurt much to throw them out when too ripen. Today, I decided to make banana bread. I had 5 very ripe bananas which meant I had to double the recipe. I combined a recipe from a Pillsbury Complete Book of Baking cookbook I have and one from the Americn Test Kitchen Family Recipes cookbook. The components and amount of most of the ingredients was the same. The biggest difference was in using whole milk or plain yogurt. Since I didn't have any yogurt, I went for the milk. One recipe called for cooled melted butter, the other for softened butter. I used melted butter. 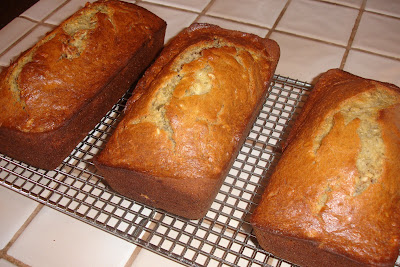 2 C flour
3/4 C sugar
1 tsp baking soda
1/2 tsp salt
1 tsp vanilla extract
2 eggs
1/2 C butter melted
2-3 ripened bananas mashed
1/3 C milk
1/2 C coarsely chopped nuts (I had some leftover walnuts which I had toasted for 10 minutes and then coated with a small amount of butter and then tossed in some sugar to make candied walnuts.)

The batter is fairly stiff. When I doubled this recipe, I had enough to fill three loaf pans (One standard size and two smaller ones). I baked it for about 55 minutes.

I was very pleased with the texture as well as the taste. Boy did my house smell great.
Posted by sylvie1950 at 3:30 PM 1 comment:

Call us Southern Californians a little wimpy when it comes to rain and I'd forgive you. The forecast this weekend has been for showers and more showers, slightly heavy at times. As a result our Backyard Super Que Saturday has been postponed until a later date probably in March.

Part of the fun of backyard events is the socializing with other teams, tasting site to site with a competitive spirit and all this outside with only an EZ Up for cover. With rain and wind added factors and cool temps (50ish), it all makes for a not so comfortable environment. Thus the decision to postpone.
Posted by sylvie1950 at 9:23 PM 1 comment:

Backyard At The Rocke III- Praticing My Ribs 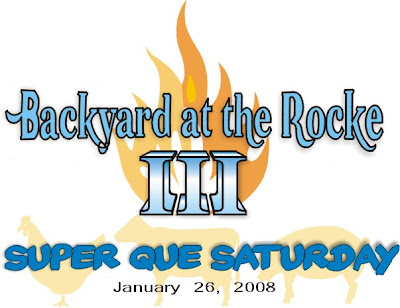 Next weekend Four Q BBQ will be joining 14 other teams in a little get together where we all prepare three meats (chicken, tri tip and ribs) and an "anything but" category, get judged by official CBBQA judges, taste each others food, and just have a good time as one big BBQ family.

Sorry for the tease, but this one is not open to non-competitors. However, we have a number of open competitons coming up for 2008 which I will definitely keep you all informed of.

Anyway, you all know I am the pork butt queen. However, for this event, we switched things around and I will be doing the spare ribs. This is our opportunity to have constructive feedback and judging of varying prep techniques and seasonings. 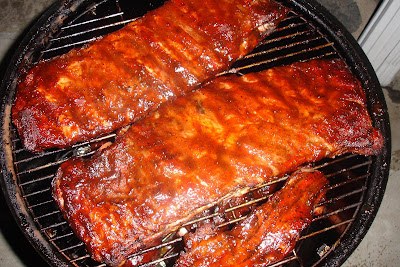 Ribs with about another hour to go. 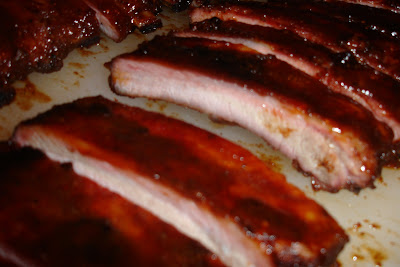 I am also going to prepare the "anything but" category. What is "anything but"? Well, just simply not ribs, not chicken and not tri tip. Could be meat, could be a dessert. To keep the other teams from stealing my idea, I can't post my practice run on this category yet, but I will say it is a "throw back" to a dessert popular in the 80's and experienciung a surge in popularity over the last year and no- it is not Fondu.
Posted by sylvie1950 at 9:14 PM 1 comment: 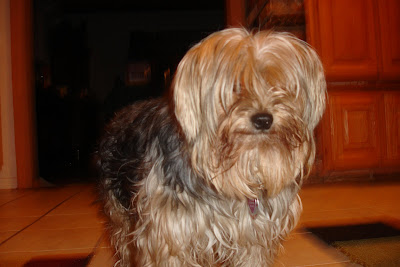 Happy New Year from Ziggy and me. With all the food I prepared and ate over the holidays, I just couldn't post another picture of food for at least a day.

2008 already is off to a very busy start. Four Q BBQ Team will be competing in a number of events this year including some fun get together backyard events. I'm looking forward to this and hopefully obtaining a Grand Championship or two or three along the way.

My day job- well work is work or better stated- so much work so little time and so few people to get an increasingly demanding job done.

I'm so proud of my kids. They are both doing well and making us proud. G, my hubby, loves his job and in between work and me, he amazingly balances the two. Life is good and we are blessed.

May you all have a prosperous, healthy and full of love year from family and friends. We had black eyed peas, collard greens, cornbread, rice and bbq ribs on the first so we started the year with the basis for a good year.