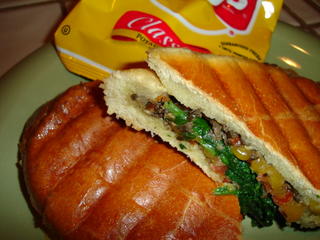 Paper Chef #8 Holiday Edition (cheddar cheese, olives, spinach and a choice- either potato or cream but not both)

Owen at Tomatilla is giving us until July 11th to post for this event. The judge this time around is Sarah of The Delicious Life.

Preheat Foreman Grill. Spread olive tapanade evenly on each half of bread. On the bottom half layer the cheese, bacon, spinach and then another layer of bacon and cheese. Cover with the top half, and wrap sandwich tightly in aluminum foil. Place sandwich on the grill, and then press top of grill to flatten; try to distribute the weight evenly over the sandwich. Cook 3 to 5 minutes, pressing down occasionally to flatten the sandwiches.

The result was a sandwich with perfect grill marks, crisp crust which when cut ouzzed melted cheddar cheese.

Cuban Style Pressed Sandwich with Spinach, Cheddar Cheese, Bacon, Olive Tapanade served on a French Bread Loaf with a side of Potato Chips

I must admit, this was quite tasty and I will be making it again. 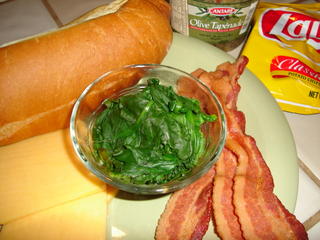 Your sandwich looks fantastic! It reminded me of a tip I read but haven't tried yet.

When making panini type sandwiches you can slice the bread and then turn it inside out before pressing. So the soft part gets grilled and the crust stays crusty.

I don't know if it works or not. You have inspired me to give it a try!

hiya sylvie! what a great sandwich! and makes me crave a panini press even more :)