During the holidays (goodness, that was so long ago, January is almost over), I ate a number of bread puddings, prepared a number of ways, and all very good. I also read a number of posts describing some not so good outcomes and some better outcomes. Anyway, for some reason I did not get my fill of this dessert often made from leftover bread nor did I understand my inner drive to want to create the dessert that continued to haunt me.

While thumbing through Martha Stewart's Baking Handbook, I noted the recipe on page 301, "Cinnamon-Raisin Bread". It wasn't the call of the picture nor recipe that drew me to want to make this. It was the thought that once made, I could use the cinnamon raisin bread for a bread pudding. The recipe can also be found on the Martha Stewart Living website. I really had to want to make this recipe as the process took quite a while, rise after rise. In the end, I had two very nice looking loaves of cinnamon raisin bread. 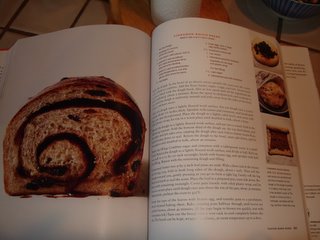 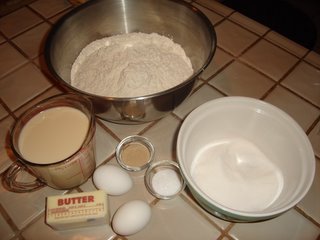 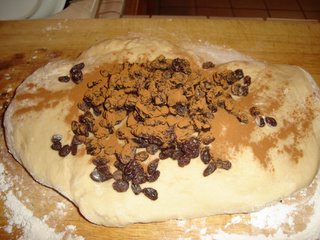 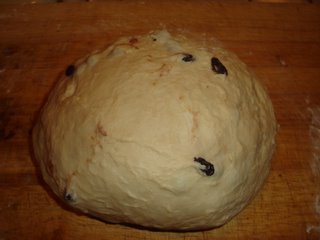 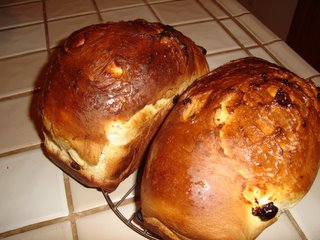 While allowing the baked loaves to cool, I went on to search for a nice custard recipe to use to soak the bread in. I adapted a recipe posted on the Delicious Life in December. I substituted the vanilla extract for almond ectract and added a dash of nutmeg. I also cut the amount of sugar and cinnamon as there was plenty of these in the cinnamon bread also. I didn't want an overly sweet pudding.

The custard ingredients are combined and whisked.

I sliced and cubed one of my freshly baked loaves of cinnamon bread placing this in a bow3l and then poured enough of the custard mixture to cover the cubes. This I allowed to soak for about 3 hours. I also warmed 1/2 cup Nutella so that it could be drizzled throughout the soaked bread cubes.

I decided to use my valentine heart bundt pan just because Valentine's day is around the corner. The pudding was cooked in a 350 degree oven for about an hour.

(Note: I used a small valentine heart shaped pan. The recipe was enough to make two of these hearts. Side note- Use of the Nutella was not a good idea. I wouldn't use it this way again. Possibly drizzled over the finished product would be better.)

The finished cinnamon raisin nutella bread pudding baked to a nice crust in the heart pan. I was able to plate it nicely. I purchased this heart pan from Bed, Baths and Beyond with a $5.00 coupon but I also saw it at Williams-Sonoma for a similar price before the coupon.

Overall, I enjoyed the bread pudding. I'll place this adaptation in my keep file. 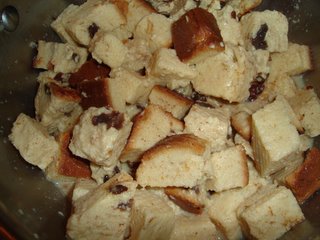 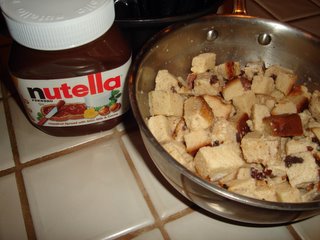 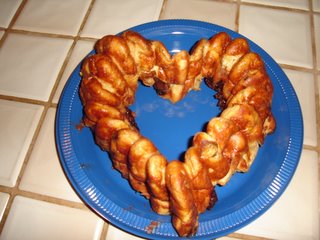 holy smokes! i LOOOOVE that your bread pudding is a heart!

hearts are one of my favorite shapes (omg, is that girlie or what?!?), so valentine's day is awesome (though i hate the fact that it's so commercial and lovey dovey LOL!)

Thanks Sarah. My husband wasn't impressed with the shape. Some guys just have no appreciation for romance.

I spend a lot of time on Valentine Day presentations for him and sometimes wonder is it just for me.