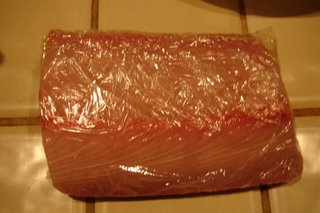 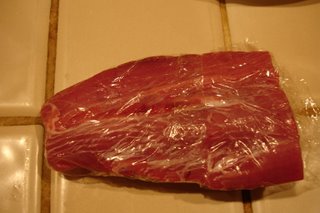 Fresh caught fish anyone? G returned from his 11 day deep sea fishing adventure with a freezer load of fish. Yellowtail, Yellow fin tuna, Wahoo, Pargo, Grouper and Dorado- yep that's right- good stuff for fish eaters (which I am not). Let me re-phrase that. I'm not a fan of cooked fish. I'm crazy about sashimi though. 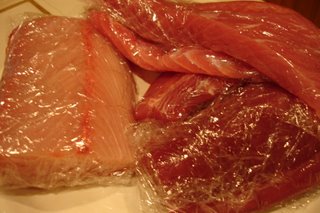 There is nothing better than fresh, I mean really fresh sashimi, still glimmering bright and no smell. A few fish caught during the later days of the trip are held in a special chilled sea water bath- never frozen. This is what I had to choose from for dinner. 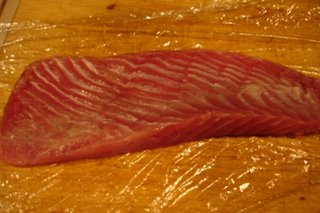 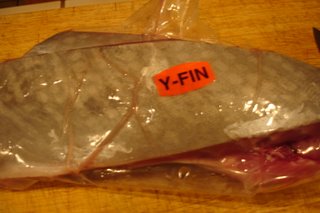 Most of the fish caught on board is fresh frozen immediately after the catch and then the fishermen either bring it home to cut up and package or they have a local San Diego company vacu-package it for them to bring home and refreeze. 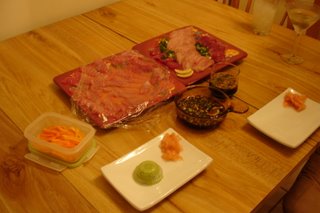 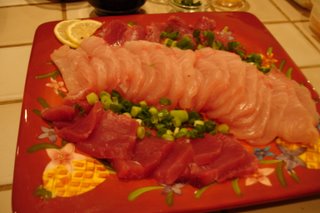 Zoom In on Plated Sashimi
Saturday night dinner was a sashimi feast. I sliced up (the best I could as I'm obviously not a sushi chef) yellow fin tuna belly- YES- primo belly, Yellowtail, and Yellow fin tuna chunks. No sushi bar had any fresher than Sylvie's Kitchen. 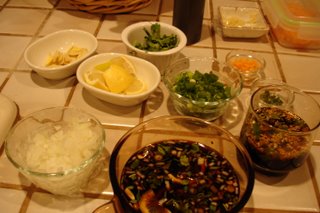 ... and the sauces for these to go with included a Ponzu Type Sauce (soy sauce, lemon slice, mirin, garlic and green onion), Soy Sauce with wasabi to taste and my own special concoction.

OMG, you are so lucky.

I do miss the days when husband would go out and bring home dinner. Not a lot of meals better than fish fresh caught. You are a lucky woman. And your dipping sauce looks tasty.

Oh be still my heart. I LOVE sushi and sashimi and yours looks wonderful!