This past weekend, G had a taste for Shabu Shabu. Now we haven't been out to dinner at a restaurant specializing in this style of food preparation in a couple of years so I guess it was about time. I searched through the web on sites such as Chowhound, Open Table, Foodie Universe and the Delicious Life for a restaurant in the West L.A. or even Downtown L.A. area. From this search I concluded that there are only a couple of recommendable restaurants in the medium priced range. Even more intriguing is what caught my attention in a post by Sarah. Not to quote but only paraphrase-'For someone who was brought up in a Japanese family, going out to eat Shabu Shabu at a restaurant is like ordering a $20 peanut butter and jelly sandwich at a restaurant to most Americans'. Whoa, that common?

With that in mind, I also took her recommendation to try to prepare this at home myself. Armed with my infrequently used electric fry pan filled with chicken broth, a thinly sliced tri tip steak, large tiger prawns, sliced chicken thighs, a bottle of soy sauce, mirin, wasabi and fresh veggies (including baby bok choy, shitake mushrooms, brown mushrooms,cabbage, bell pepper, carrots, green onions, sweet onions, raddish, garlic, bean sprouts, lemon grass, cilantro and ginger) from the vegetable stand, I prepared Shabu Shabu for my G. I had no recipe but only descriptions from post on the web and what I remembered from our previous venture. Now before you pooh pooh this adventure, I know my ingredient choices may not be typical but that's where the Soul Fusion comes in. 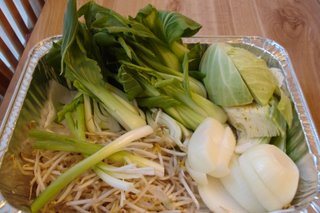 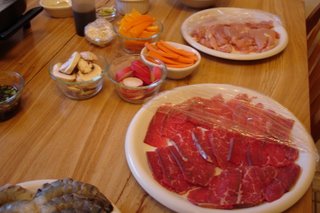 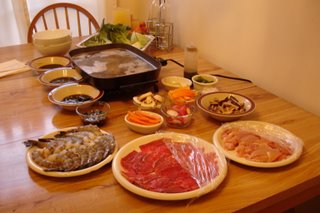 Ready to sit down and enjoy 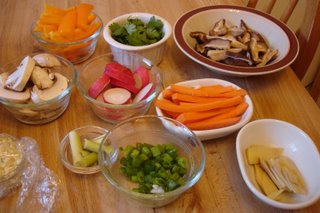 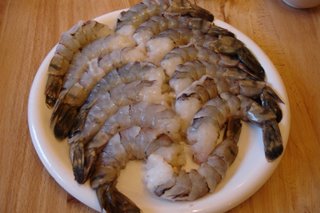 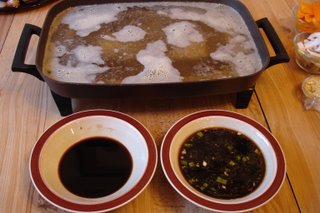 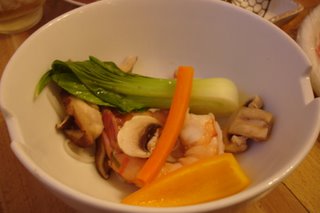 oh, yum! i really love shabu shabu and i'm so impressed with your home made version! and, btw, there are two pretty good shabu shabu places in the micro tokyo neighborhood (sawtelle/olympic in west l.a.). my two favorites are shabu hachi on olympic (close to barrington) and mizu 212 on sawtelle (south of olympic). shabu hachi is more easy-going and a little more reasonably priced. mizu 212 is a little higher end, with offer stuff like organic beef and brown rice. their lunch is pretty reasonable.

I think the only way to do Shabu Shabu is at home with friends. With what I have paid at a restaurant I could have had 8 friends over with the same amount of food for all.

My wife also makes her own sauce which we were taught how to make. It consisits of shredded daikon, mirin ponzu and some other fun stuff.

Thinking of it now is making me crave it.

I love love shabu shabu. I think it means swimmy swimmy in Japanese. My fish allergy does make it difficult to go out since they use a fish broth to cook in but I like the idea of chicken broth.

I really enjoyed this meal. I think it would be great to have a couple of friends over to enjoy with us also. I've been thinking of other ingredients to add which may not be traditional but would go with the cooking process.

suxYou know i'm here via 52 cupcakes (congrats by the way - we're winners!!!) and i just love your style and spirit, I'm dying to try this at home, you are certianly a cook after my own heart!

You know, you rock!! i'm here via 52 cupcakes (congrats by the way - we're winners!!!) and i just love your style and spirit, I'm dying to try this at home, you are certianly a cook after my own heart!

Congrats on winning the cupcake cookbook. If you're a dog lover (from your profile picture), check out this new little blog I'm starting...http://whydogsbitepeople.blogspot.com/

I hope you get a laugh.

Looks good Sylvie! Nice to be adventurous at home!