Every week G and I go out on a "date" together. It's a way to make sure we don't become housebound and gives us the opportunity to enjoy each others company outside of home. Saturday we decided on dinner and a movie. I had a taste for either BBQ or fried chicken. We recently dined at Aunt Kizzy's and didn't want to go back there so soon. We then decided that Johnny Reb's Roadhouse would suit our fancy.

It is located in what I call downtown Bellflower. A quaint street where over the weekends they may block off the street and hold street fairs, exhibits, harvest festivals and on and on. The Roadhouse is decorated with old license plates from southern states, country kitchen items, and a bathroom with the sounds of an outhouse and peanuts you eat and throw the shells on the floor. 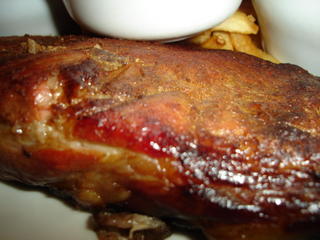 The menu includes a number of BBQ items from sausage to chicken, beef or pork ribs, pulled pork and brisket. All smoked. You can also get hamburgers, chicken fried steak covered in gravy, fried catfish, fried chicken and even hamburgers. The fried chicken is cooked when you order it so they warn you the wait will be 20 minutes. 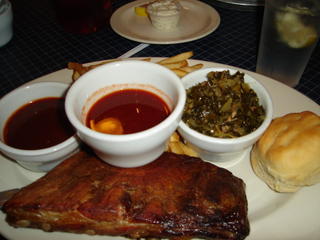 I was quite hungry when we arrived so I opted for the BBQ pork ribs with a side of both North Carolina style BBQ sauce and regular BBQ sauce. G went for the fried catfish. My sides included french fries and collard greens with a large biscuit. I could have had hush puppies or cornbread. G's sides were fried sweet potatoes and coleslaw with hush puppies. 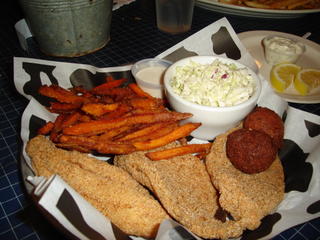 A half rack of the ribs equals 6 ribs. They were very meaty and had a nice smoky flavor. I had to admit they were better than the ribs I had at Aunt Kizzy's but not as good as the ribs at JR's BBQ in Culver City. G's described his catfish as good but not necessarily the best he has had. 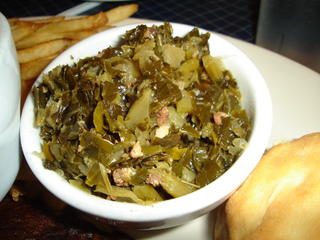 The waitress was very attentive and friendly. She received a very nice tip.

After dinner we went to a movie-my choice. I have been wanting to see the "40 Year Old Virgin" for a few weeks. Not G's first choice. It was hilarious. I laughed through the whole movie. I also noticed that G was also laughing pretty hard. This has got to be the funniest movie I have seen a number of years. I really enjoyed it.
Posted by sylvie1950 at 6:54 PM