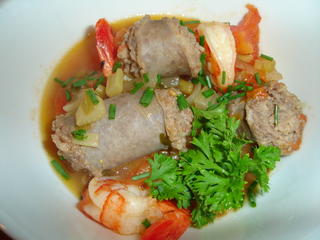 Owen at Tomatilla announced the New Orleans edition of Paper Chef as a tribute to its food. "A special culture and community and feeling. Unique food. Unique music. Unique experiences. But it is also celebrated for celebrating! Right now there isn't much time for that but you bet there will be as the water goes back down and rebuilding gets under way. And it is important not to forget what New Orleans was, so that in the serious rebuilding ahead those special things also get rebuilt. So in the spirit of a unique place with unique food and its own unique style, it is time for Paper Chef to give a little back …"

My contribution to this Paper chef is a simple New Orleans style soup. I followed no recipe but instead relied on my instincts. 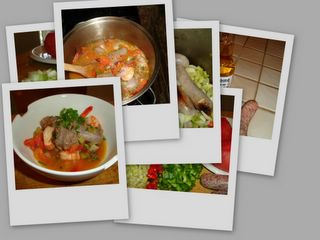 Tomatoes are still abundant in my garden along with green bell peppers and serrano chiles. To make the trinity, I cut up three stalks celery, one yellow onion and one large bell pepper. In addition I diced four green onions and the serrano chiles ( I used three but I like it hot) were added to the trinity. This was added to a stock pot with about a ¼ cup of extra virgin olive oil and cooked until the vegetables were slightly limp.

To continue to the Paper Chef theme, I added one bottle of beer (Corona) and one cup of chicken broth.

This was left to simmer about 15 minutes. I then added one pound of uncooked jumbo shrimp and continued to cook until the shrimp was opaque. I then added parsley and chives (both also from my garden) to the finished soup.

The resulting soup was light and the taste was extraordinary. It is a must make again.
Posted by sylvie1950 at 11:11 AM

Hi Sylvie, got here from Tomatilla trying to find ideas to use for Paper Chef #10 leftovers: It's amazing I didn't know much about Cajun, Creole and the trinity ingredients. That's what I'll use now... :)