Last night my husband and I decided to go to Jerry's Famous Deli for dinner. Friday nights we try to set time aside from both our hectic schedules to spend time with each other. We often go to Jerry's Deli for the variety and because of the location (Easy to drive to in traffic jammed L.A. on Friday evenings.)

We entered the Deli noting that there is an ongoing remodel on the outside and inside to update the look of the building. The entry is now black, grey and stainless steel cold in appearance. I thought maybe that the entry wasn't complete yet. We are escorted to our table booth and seated.

I noted the table decor was also a bit different. The salt, pepper and sugar substitute were now in this triangular looking plastic box which had a button on top of it and a picture of a seemingly happy couple obviously in love. My husband is the curious type. Always trying to figure out how things are put together and basically just why is this thing on our table. He pressed the button and a light glowed. We thought maybe that this was a mood light that no longer worked. He picks up the thing and pressed the button a few times more and in the process, caused the salt shaker to fall out and spill over the table. Before we could clean it up, a jolly personable waitress appears to assist us. 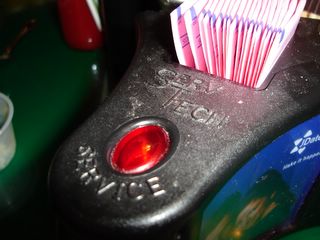 We comment on the new little gizmo. While cleaning up our mess she tells us that this little contraption is a wait staff call device. Each press of the button on top of the device results in a light going off in back noting that for example table #24 requests attention. Yea, there was some writing by the button stating this, but who read it. She also told us stories of how this little gizmo is the worse thing they could have placed on the tables. Parents give it to their kids to play with. This resulting in endless lights going off in the wait staff area. Just as we did, patrons push the button trying to see what will happen. 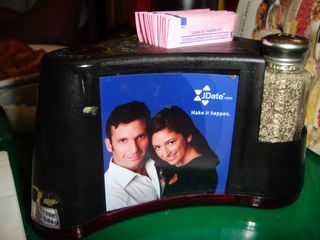 Anyway, to make a short story shorter, our waitress goes on to tell us that some advertising company pays the deli $3.00 per contraption per table per day to place the device. It is an advertisement for a dating service. Remember the picture of the happy in love couple. Not very clear on the photo was a website address called J "something".com. The "J" was to indicate it was a Jewish dating service and not "J" for Jerry's Famous Deli. Duh! The waitress beckoned us to look around the deli. She asked, "Look at who is eating here? Do any of these mostly coupled off, older people look like they need a dating service?"

Good point. Then why would an advertising company pay for the placement of this thing? We estimate there are a minimum of 50 tables, at $3.00 each per day that is $4,500 per month paid. I'm sure that this is not the only restaurant with these devices on the table. How much could an ethnic group specific dating service generate anyway? 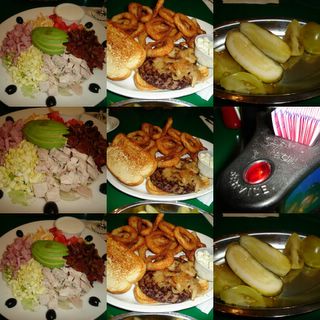 I included pictures of our very enjoyable evening at Jerry’s Famous Deli. By the way, the food was great, too much of it but good. I had a Cobb Salad with Bleu cheese Dressing on the side. My husband had a Bleu Cheese Hamburger with Onion Rings. After dinner, we saw a movie- "Mr. and Mrs. Smith".
Posted by sylvie1950 at 10:36 AM